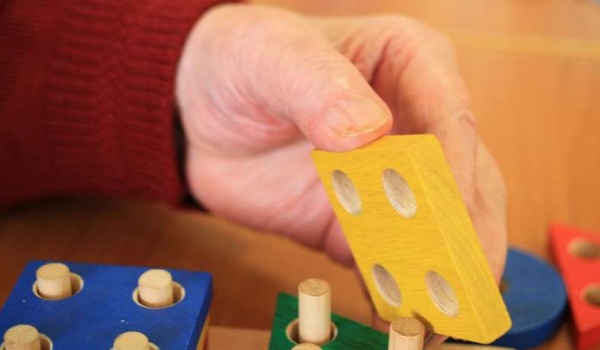 Lewy body dementia causes a progressive decline in mental abilities. People with Lewy body dementia may experience visual hallucinations and changes in alertness and attention. Other effects include Parkinson’s disease-like signs and symptoms such as rigid muscles, slow movement and tremors.

Lewy body dementia signs and symptoms may include:

Visual hallucinations. Hallucinations may be one of the first symptoms, and they often recur. They may include seeing shapes, animals or people that aren’t there. Sound (auditory), smell (olfactory) or touch (tactile) hallucinations are possible.

Movement disorders. Signs of Parkinson’s disease (parkinsonian signs), such as slowed movement, rigid muscles, tremor or a shuffling walk may occur. This can also result in falls.

Poor regulation of body functions (autonomic nervous system). Blood pressure, pulse, sweating and the digestive process are regulated by a part of the nervous system that is often affected by Lewy body dementia. This can result in dizziness, falls and bowel issues such as constipation.

Cognitive problems. You may experience thinking (cognitive) problems similar to those of Alzheimer’s disease, such as confusion, poor attention, visual-spatial problems and memory loss.

Sleep difficulties. You may have rapid eye movement (REM) sleep behavior disorder, which can cause you to physically act out your dreams while you’re asleep.

Fluctuating attention. Episodes of drowsiness, long periods of staring into space, long naps during the day or disorganized speech are possible.