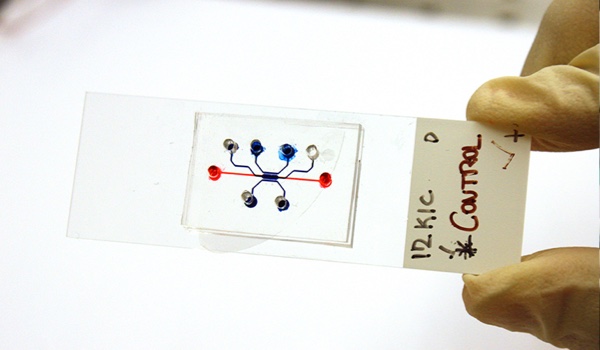 Researchers at Purdue University have now built a unique microfluidic device that can be used to test a cancer drug on multiple tumor cells subtypes. Using this technology the researchers believe that new drug therapies can be discovered and existing medicines used more effectively.

“The drug discovery and screening process has been using one cancer cell subtype and studying how it interacts with neighboring non-cancer cells, but this may overestimate the efficacy of the drug,” said Bumsoo Han, one of the Purdue leads on the research. “By condensing time to look at how cancer cells interact within a pancreatic tumor, we found that one cancer cell subtype can not only be more drug-resistant than the others, but drug-sensitive cells can also become resistant through interaction between the subtypes.” This illustration shows cancer cells, each cell type represented by a different color, interacting in the channels of a structure that mimics the pancreatic duct. (Purdue University illustration/Hye-ran Moon and Altug Ozcelikkale)

The new microfluidic device features specially designed collagen channels that function as the pancreatic duct on a very small scale. Within, a mix of cancer cells can grow and proliferate and various therapies can be delivered into the channels. In the past, similar devices have been used to work with late-stage tumor cells, but the new technology is intended to be used with earlier cell lines that have not yet mutated. This may help to find out which therapies are most effective at preventing mutations from happening.

“Not much research has been done on what kind of interaction happens within tumors, so those mechanisms of drug resistance have been overlooked,” added Han.

From the study abstract in Lab on a Chip: