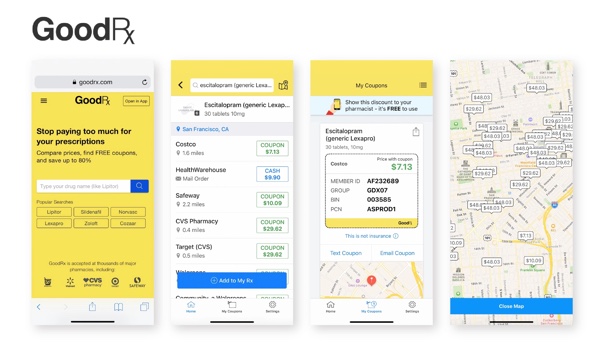 In the deluge of digital health companies preparing to go public this summer, another one joined the ranks. A startup that helps users track the price of prescription and negotiates cash pay discounts with pharmacies, filed for an IPO on Friday.

The company expects to raise roughly $100 million in the offering, though it has not yet set a price range for its stock. It plans to be traded on Nasdaq under the ticker “GDRX.”

At the beginning of the month, Reuters reported that was preparing for an IPO, with a listing that could take place this year or in early 2021.

Co-founders and co-CEOs Doug Hirsch and Trevor Bezdek started the company in 2011, after Hirsch found out a prescription would cost him $400 at his pharmacy, with insurance. Since then, the company has ballooned to 4.9 million monthly active users who use it to compare pharmacy prices and, in some cases, get a coupon for a discount.

Most of the company’s revenue, roughly 97%, comes from fees collects from pharmacy benefit managers when consumers use a code to fill a prescription. Last year, reported revenues of $388.22 million, up 55% from 2018. Its net income, at $66.05 million in 2019, was up 50% from the previous year— a rarity among the companies that have filed to go public so far this year.

Though prescription coupons make up most of GoodRx’s business, the startup also has a telehealth platform and a subscription model. For the latter, subscribers pay a $6 monthly fee for lower prices in some pharmacies. also recently added a mail order option for subscribers.

Last year, the startup acquired telehealth platform HeyDoctor, which it expects will continue to grow in the future. That said, the marketplace for telehealth is competitive, with Teladoc, Amwell, MDLive and several others vying for market share. It also brings in much lower margins than GoodRx’s prescription discount business.