Gene Therapy Creates Replacement Skin to Save a Dying Boy.

What is Epidermolysis bullosa?

Gene Therapy Creates Replacement Skin to Save a Dying Boy.

The treatment described in the new report offers hope to some patients but not all. Not every mutation can be corrected in the same way as the one in the report.

“It certainly made an incredible transformation in the life of the boy,” said an expert not involved in the case, Dr. Jouni Uitto, the chairman of the department of dermatology and cutaneous biology in the Sidney Kimmel Medical College at Thomas Jefferson University in Philadelphia.

“Now it’s just one case, and it sort of remains to be seen what’s the general applicability of this approach. The other issue is, what’s the cost of this?”

Dr. Uitto also cautioned that epidermolysis bullosa often involves damage to internal tissue, like the lining of the esophagus and urinary tract, that gene therapy for the skin cannot repair.

Dr. M. Peter Marinkovich, an associate professor of dermatology at Stanford University School of Medicine, said he was “blown away” by a presentation he had seen about the case. “Gosh, it’s just a great advance,” he said.

Dr. Marinkovich has been conducting similar research and published a report a year ago in JAMA in which his team treated smaller areas of skin in four adults with a different form of the disease.

Some improved, but the responses varied and tended to decline after a year. The research is continuing.

The new report, he said, “has taken it to the next step and has actually used it to treat a large amount of skin. That’s what’s really incredible.”

Other researchers have tried bone-marrow transplants to correct the genetic flaws in the disease, but several children have died from the side effects of that arduous treatment, and results have been mixed in those who survived.

The boy in the Nature article had suffered since birth from blisters all over his body, and in 2015 contracted bacterial infections that caused him to lose two-thirds of his skin. His doctors did not know how to treat him, other than keeping him on morphine for the pain. 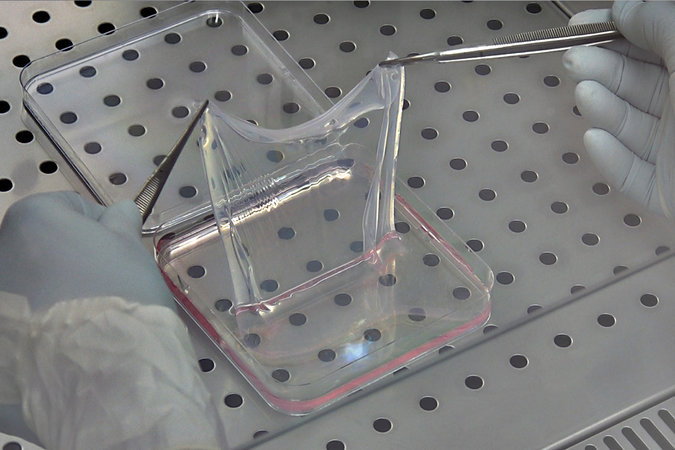 Because burn victims also lose skin, the doctors sent him to the burn unit of the Children’s Hospital at Ruhr University in Bochum, Germany. A photograph of him then shows an emaciated body encased in raw, crimson flesh.

“We had a lot of trouble keeping this kid alive,” Dr. Tobias Rothoeft, of the Children’s Hospital, said during a telephone briefing.

Doctors in the burn unit tried everything: antibiotics, bandages, special nutritional measures, a skin transplant from the boy’s father. Nothing worked.

“After two months, we were sure we could do nothing for this kid and he would die,” Dr. Rothoeft said. The physicians began to discuss just keeping the boy comfortable. But his parents begged them to keep trying.

The doctors pored over medical journals and decided to approach Dr. Michele De Luca, the director of the Center for Regenerative Medicine Stefano Ferrari at the University of Modena and Reggio Emilia in Modena, Italy.

His team had treated smaller patches of skin on a patient with the same disease, and he had expertise in growing large skin grafts, which had been used to treat hundreds of burn victims. He is also renowned in the field for producing corneal grafts that have saved the sight of people with eye injuries.

“He promised he could give us enough skin to heal this kid, which we then tried, and we were, in the end, successful,” Dr. Rothoeft said.

Dr. De Luca described the case as “compassionate use of an experimental therapy” that is being tested in clinical trials.

The doctors removed a sample of the boy’s skin — slightly more than half a square inch — and took it to Modena, where they genetically engineered his cells, using a virus to insert the normal form of his mutated gene into his DNA.

Then they grew the engineered cells in the laboratory into sheets of skin and transported them back to Germany, where surgeons grafted them onto the boy’s body.

In October 2015, they covered his arms and legs with the new skin, and in November, his back. Ultimately, they replaced 80 percent of the child’s skin.

Dr. De Luca said that when the bandages were removed, “It was spectacular. It was great. We removed the gauze and saw the epidermis underneath. Everybody was pretty happy. We got the feeling that the body of the kid was recovering, was responding. That was the time where we thought, maybe we can make it.”

A major concern with any type of gene therapy is that the inserted genetic material could have dangerous side effects, like turning off an essential gene or turning on one that could lead to cancer.

Analyses of the patient’s new skin did not find the added genetic material in any worrisome places, the researchers reported. Tests also showed that just a few long-lived stem cells maintained the new skin, an important finding that underlines the need for careful cell culturing, Dr. De Luca said.

The boy was in the hospital for almost eight months, Dr. De Luca said, including more than four months during which he was kept in a medically induced coma to spare him from pain. The drugs were stopped a few weeks before Christmas.

A version of this article appears in print on November 9, 2017, on Page A6 of the New York edition with the headline: Gene Therapy Creates New Skin to Save a Dying Syrian Boy. Order Reprints| Today’s Paper|Subscribe