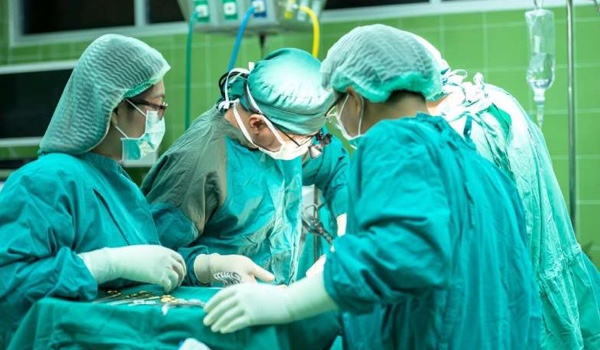 Heart attack, kidney failure, stroke. These are just a few of the life-threatening complications that patients are at risk for following surgery.

Now Jefferson researchers have developed an easy-to-use, web-based tool that predicts the risk of post-surgical complications such as kidney failure and stroke. The model may help medical professionals put preventive measures in place before the need for emergency intervention.

“We need to be able to assess the risk of life-threatening, post-surgical complications so we can then come up with individualized ways to reduce those complications,” says Sang Woo, MD, a clinical associate professor of medicine at Thomas Jefferson University who led the new research.

“Seeing how much suffering those patients had gone through, I wanted to figure out what we could have done differently to prevent these life-threatening complications,” Dr. Woo says.

Risk calculators that doctors currently rely on mainly assess for cardiac risks, such as heart attack or cardiac arrest. They do not provide risk assessment of other major complications like stroke, and doctors have not really paid much attention to risk assessment for kidney failure, Dr. Woo says.

“We wanted to assist doctors to be able to assess the risk of stroke, in addition to traditional risks,” he says.

To develop a predictive model that was accurate and easy for clinicians to use, Dr. Woo drew on expertise in analyzing big data sets and machine learning, and collaborated with a multidisciplinary Jefferson research team including a surgeon, cardiologist, nephrologists and hospitalists.

“Often times we do the research and publish a research paper that is too complex to translate to the bedside,” Dr. Woo says. “My goal from the beginning was to come up with a new model that is very practical and useful and that can be incorporated into routine patient care.”

In a study published online December 29, 2020 in the research journal Kidney360, Dr. Woo and colleagues developed a model to assess a patient’s risk of developing acute kidney injury (AKI) following surgery. AKI is a serious medical issue. More than a third of patients that required dialysis following cardiac surgery died for example.

He and colleagues analyzed data from more than 2.2 million surgical patients, of whom about 7,000 developed AKI requiring dialysis. The analysis revealed that patients who required dialysis were older and more likely to have congestive heart failure and diabetes.

The researchers then trained the model with data from over 1.4 million patients using these and eight other predictors before testing it out on data from another set of more than 800,000 surgical patients. The model accurately predicted which patients would develop AKI.

In a second study published online in the Journal of the American Heart Association on January 30, 2021, Dr. Woo and colleagues used the model to predict the risk of stroke, cardiac event or death within 30 days after surgery.

For this version of the model, the researchers analyzed data from more than 1.1 million surgical patients. They used predictors such as age, history of stroke, type of surgery and other health factors that could be measured prior to surgery to build the model.

They found that the model predicted which patients would suffer a stroke, cardiac event or die within 30 days of surgery with high accuracy. The predictive power of the model was outstanding, with area under the curve (AUC)—a standard way of evaluating a model’s performance—measuring 0.87 for stroke and 0.92 for mortality. The model also predicts cardiac risk (AUC 0.87) similar to or better than widely used cardiac risk models.

As a web-based tool, the model is also easy to use. Doctors conducting pre-surgery assessments can use the tool at the patient’s bedside.

The new risk assessment models will benefit clinicians and patients. With the models, clinicians will be able to inform surgeons of the risks and better counsel patients, both of which will translate to improving patient care.

“Now that we have a tool to assess stroke and kidney failure risk objectively, we are investigating novel ways to reduce that risk,” says Dr. Woo.